I can’t begin to adequately express how utterly silent it can be here.

My ears are being tuned to a different frequency here. In the vast silence I begin to notice the small sounds when they emerge. The skittering of a mouse in the wall. The tormenting buzz of the invisible fly. The eerie sliding of snow off the metal roof. The hum of the transformer outside as one of my dogs pauses to pee next to it. 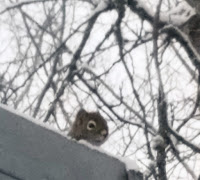 The scolding chatter of the squirrel in the early morning light as I try to determine the pitch of the barn roof that needs replacing. The sound of the furnace burner going on. Then silence as it goes off. Then the fan as it kicks into high gear. Then silence.  I can almost hear the house gradually cooling off before another heating cycle jolts the silence. The pop of the stove pipe heating up. I listen anxiously for the crashing sound of my cat bolting through the woods as she comes to my worried call.

In the distance I’ve heard what sounds like heavy truck traffic. Except that it doesn’t vary in pitch or tempo. Yes, there are logging trucks driving by daily here, and that sound is distinctly different. I know when a car versus and truck versus a logging truck is approaching.

I can hear the neighbor’s dog barking sometimes in early evening if I listen closely, then my dogs join in creating a cacophony and my ears hurt from the din. One night I heard howling. Could it have been wolves? My dogs quickly suffocated the sound with their contributions. I love my dogs, but their constant production of noise is often an impediment to my ability to hear the sounds of wildlife around me. I notice the sound of my own voice internally and externally as I become annoyed by the interruption in my hearing experience by the overwhelming vocalizations of my dogs.

One day I looked up as I was stacking wood because I heard something and saw three contrails high up in the sky. I hear planes frequently. Not low flying small planes, but jets way up there.
There’s more going on here than one might first expect.

And then there’s The HUM. I’ve heard it three times now. Twice near 9:00pm just as I was settling down in bed with my book and once during the day. At first I questioned myself. When it’s very quiet before I fall asleep I can hear my own head buzzing with tinnitus. But it was not the same. I could actually hear both at the same time! It didn’t last long, about 15-20 minutes and then faded. Not like something moving away either, but more like a creepy disappearing act. The HUM wasn’t exactly same the next two times, but similar enough to classify it as The HUM.

I’ve always had a very good sense of hearing. At least compared to my partners who often had hearing loss due to various reasons (mostly exposure to loud music). Really too good. I can often hear things that others would prefer I not hear: conversations, farts, burps…lol

I’ve always felt overwhelmed by too much noise. Crowds make me feel crazy. The overstimulation makes me physically sick. I find I need to find a quiet place to be alone and rest after a relatively short exposure.

I have even worried that I was losing my own hearing and went to have it checked. I have some minor hearing loss, but nothing significant.

And now there’s the silence of not being around people on a regular basis. Granted, I was alone a lot before I moved here, but there was always the ambient sound of the activity of people all around me: kids across the street screaming as they played, teens laughing as they set off fireworks, adults shouting over lawnmowers, our neighbor washing the farm equipment or fixing a motor, etc. It drove me nuts sometimes, but sometimes it was also comforting to know I wasn’t alone. I could walk down the road and talk to someone if I wanted. I didn’t want to and never did, but I knew I could if I did want to. It’s not that way here.

It's going to take a bit of a mental and emotional adjustment. I love the North Woods, and I’m glad I’m here, but there are always unintended consequences to every Ask of The Universe. The sounds I long for are in competition with the sounds of my dogs. The irony is that I've chosen to live where I live in great part due to my commitment to my dogs.

I still say, “Be careful what you ask for, you may get it!”