ad VENT ures in the night 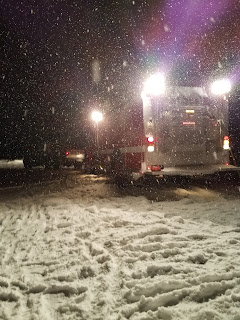 I toss and turn restlessly thinking I’m just having another hot flash, but I can’t quite figure it out. I scrunch up my nose automatically sensing something foul.  I get up to pee and notice the odor is stronger in the bathroom. In fact, as I flush the toilet it gurgles ominously. The stench is increasing. It’s 2AM and I’m now horrified. I run around the house searching for the origin of the stink, but I know it’s the worst in the bathroom.

I open a couple windows and call Nikki repeatedly until she finally answers the phone. Her raspy, tired voice sounds really harsh, and I feel bad that I’ve interrupted her sleep when she is sick. But I am desperate for help. Nikki advises me to call the fire department. I crank up the computer, gagging as I do, and find the number. No one answers. I dial 911. The call doesn’t go through. I try again. Nothing. I’m wondering if I remembered to update the settings on my new phone. I only have internet calling, and 911 doesn’t work the same. You need to manually supply your address, etc. I call Nikki again, and somehow get 911!!

The operator is not in my county so she transfers me to Itasca County 911. I explain that my house is filled with noxious gasses and that it’s making me ill. She tells me to get out of the house—go sit in the car until the fire department gets there. I scramble to get all the dogs outside and into their kennels. I am able to retrieve one cat and put her into the running car.

In just minutes the first rescuer arrives. I find out that he lives just down the road from me and we chat a bit about the problem. Not the best circumstances for making a good first impression. Soon, I hear the siren of the fire truck which is coming from Big Fork just 10 miles away, and that triggers a pack howl. The siren blares all the way up the driveway with lights flashing. The dogs are going nuts.

There are two more pick-ups now, and a total of 7 volunteer firefighters. Their chief advises them over the phone to put a ladder up onto the roof and knock out the ice build up inside the sewer vent on the roof. All the guys are pretty substantial, so they nominate the one with the most svelte physique to climb up and do the job. 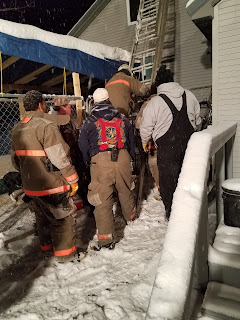 In minutes all is well and the house is starting to air out. Thank God the temp was 11 degrees ABOVE zero and not 37 degrees BELOW! Apparently, this is a common problem up here in the North Woods where the weather is so extreme. Everyone had sympathy, but little advice.

I called the one person I know so far who is both and HVAC contractor and a plumber, but he was not very interested in coming over until next week some time “after the weather breaks”. We’re expecting minus 30s every day for a week starting Friday. The information I got was that it’s not a matter of IF it happens again, but WHEN.

So yesterday I drove into Grand Rapids and bought a couple of “solutions” which next time, if I have to call out the fire fighters, I shall hand them over and request they place them upon the vent. There is no possible way I would ever be able to get on the roof to do this myself.

Today I went into the Effie café to eat while my oil was being changed across the street at the Country Store. The owner, Kathy, gave me a number for someone whom she felt would be able to help me much sooner than “after the weather breaks”. Indeed, Jim was agreeable to coming over with a ladder tomorrow "depending on the weather".  There was a couple eating that got involved with our conversation and offered that they too had the same problem, but put in a copper T and have not had a problem since. The copper T was one of the solutions that I purchased yesterday, so I feel heartened.

I don’t know what Jim charges, but whatever it is, it will be more than worth it if the “solution” works.