Am I on the North Pole?

Funny how easily you can get acclimated to something. I’m talking about the weather (not politics). This morning, where I live, it was 40 degrees below zero fahrenheit
at 6am and holding at 7am. At 10am it had warmed up to minus 16.

At 10am the dogs were fed and primed for another potty excursion. I took them out on leashes in one and twos until everyone had done their thing. Even the biggest baby of them all, Buddy, who is a large shepherd mix is starting to acclimate. He actually wanted to walk around a sniff stuff. But by the time we got back to the house he was alternating lifting his feet and acting pathetic. I was sweating. Up and down the stairs, up and down the stairs again, and again, and again in layers of protection really gives one a good workout. Once everyone was settled back in, I had to go back outside just to cool off! 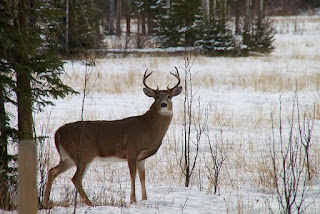 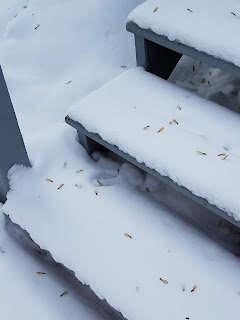 As I looked around, I saw some prints in the snow that were not made by the dogs. I followed deer tracks all around the house and up the stairs to a side door! Apparently, the deer are quite comfortable here. No surprise. Frank (the previous owner) feed them regularly. He boasted of having dozens at a time in the yard. I will not be continuing the tradition, however. I don’t want the deer getting hit by the logging trucks or tempting the dogs. The dogs saw them once and thankfully they were all in the outdoor kennel with only Buddy outside with me on a leash or he would have tried to chase them.


I’ve been awakened now several times by the dogs howling. It’s usually around 4am and 6am. My guess is that is the time the deer approach the house looking for food. On such a cold night as last night, I’m sure they were willing to cross their comfort zone. 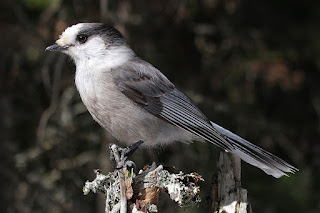 Even with several dogs present barking and howling there are still signs of wildlife everywhere. There was a bald eagle perched in a tree in the yard Thursday. There are blue jays and a couple of Canadian jays that seem to be waiting for something (Frank told me he had been feeding them too.). And of course, the crows or ravens. If they are crows, they are big ones. None have come very close to this house for some reason. There are cute little red squirrels who tease the cats and eat the seeds from the maple seedlings that blanket the snow around the house. This morning I saw cat prints again that were definitely not made by my kitties (who haven’t been out lately). These prints were in the driveway, across the yard and into the woods. Not huge, but not small either. I wish I could have gotten decent photos of the prints. The sun and the snow just didn’t provide much contrast.

Looks like we are in for a stretch of extreme cold here this coming week. I’m not sure I can wrap my brain around why in Prudhoe Bay (Deadhorse), Alaska the temp was 1 above zero, and even Winnipeg was only -18 this morning. I guess while the North Pole melts, Minnesota gets to go into the deep freeze.

I always thought that the farther North you go it’s supposed to be colder. But that isn’t always the case apparently. In Minneapolis, a half century ago, it was pretty common to see -20 or -25. However, I don’t ever remember it ever getting -40 though. And even though it’s still cold in the Twin Cities metro area, it’s still not as cold as it used to be.

Climate change is fickle and scary. But this isn’t about politics—it’s about survival!