Just One Dam(n) Thing After Another

It’s just one dam(n) thing after another around here! Four days ago I noticed a wet spot on the ceiling on the office side of the archway that separates my office from the living room. That wet spot started to drip. I noticed that the other end of the arch way was also dripping. The paint was bubbling half way down the archway announcing the arrival of water. I called my BFF Nikki in a panic and she talked me down a bit. Her advice was to punch a hole in the ceiling with a nail to give the water a place to drain and go outside and rake as much snow off the roof as I could in the area of the ice dam causing the invasion.

I had already removed snow several times, to little or no avail. The ice dams cometh. 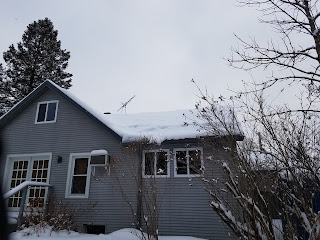 There was another ice dam on the opposite side of the house which I could see had infiltrated in some earlier epoch. The evidence was pretty clear. Someone had tried to patch the corner in the dining room, but it had lifted off with the damp. Luckily, the water from this ice dam had a habit of running down into the basement. Sure enough, the cinder block wall was streaked with water. Luckily, there is a floor drain nearby which any excess water might go if necessary.

For two days I was subjected to the incessant drip drip drip of my accidental water feature. Buckets with rags inside to muffle the echoing madness finally became a background noise that I soon was able to pretty much ignore. 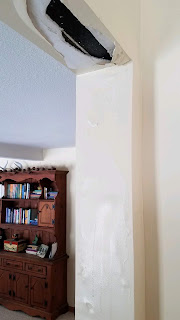 As the water became more persistent, I enlarged the hole and dug way some of the lifting paint and drywall revealing wood and metal.

Then, suddenly, it stopped. The ice dams are still there, and the guys that are supposed to come over to remove the snow from my roof have not appeared as of yet. No one is answering my texts. A quick drive around “town” made the reason clear to me. I am not alone! There are plenty of others with more urgent problems. Bigger dams. No doubt bigger leaks inside their homes. Everyone I’ve talked to up here is lamenting the consequences of this winter’s pounding. From plugged sewer vents to massive ice dams. The combination of unusual amounts of snow and colder than normal temperatures has combined with episodes of warmer weather to create quite a mess for some of us.

So what is the fix? Right now, the best I can do is try to keep as much of the snow off the roof to prevent additional ice build up. I have been unable to find someone with an ice steamer to come steam off the ice. I have also been unable to find a machine to rent. I could buy one for somewhere between $4,000-$8,000--not happening. The long-term fix is to gut the attic, and make sure there is proper insulation. Remove and fix any damage, and install ice melt cables on the roof and in the gutters in anticipation of next winter. You might ask why don't I make an insurance claim. Well, this IS a pre-existing problem. I also have a huge deductible. And then my premium will go up. This is not catastrophic. And I do have help.

Also, a consequence of all the extra snow is that I may now be facing a problem with the well. 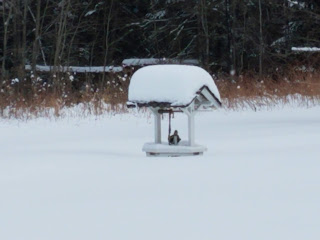 The well cap has exposed wiring coming out the top of it; and although there is a wishing well roof over it, the snow has grown to almost meet the exposed wires. I tried to shovel a path out there, but soon got bogged down in 4 feet of snow with mushy footing underneath. Not to mention the berms created by plowing that are taller than I am! I sure wish I had snow shoes right now! There is simply no way for me to get out there and remove the snow. I had noticed this when I looked at the house before I bought it and was assured it was fine. Not to worry. Well, I was worried then and I'm worried now. All I need is to short out my well and be without water! 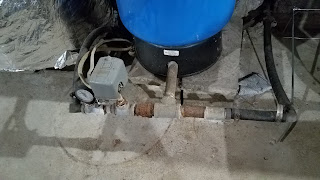 And yet, it could be that before that might happen, my water pressure tank could fail. There is no relief valve. No shut off valve. The plumbing is rusty and wonky to say the least. All the plumbing here is subject to replacement.

And yet, I do feel lucky. I’ve heard horror stories of others’ actual sewer pipes freezing. Something like that spells BIG Trouble. I may have some issues, but so far, they are not something catastrophic. (fingers crossed, knock on wood, offerings to the gods).

I knew there were lots of issues with this property before I bought it. I waived an inspection in part because I was in quite a hurry to find myself a place to live, but also because I knew it would never pass an inspection. So I deal with it. As best I can. With help from wherever it may come from.

Thankfully, help does seem to be there when I need it. Maybe not immediately, but eventually. And I’m reminded that it’s only life after all. I am safe, warm and fed. My pets are safe, warm and fed. This too shall pass. And then when I look back at my first winter in my house, I may chuckle at how minor all these problems actually were! Who knows what challenges summer might bring? I can only imagine.

On a more thrilling note, Nikki, my daughter Maren, and I saw a moose--TWICE--last week not more than a mile or so from the house. Pretty cool! (hm...looks a bit like Bigfoot now, doesn't it?) 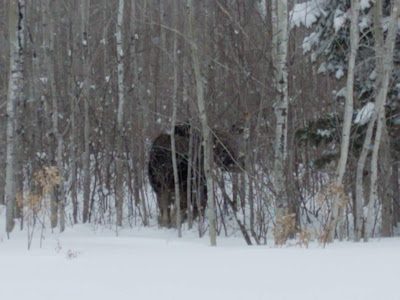