Old age is not for sissies! 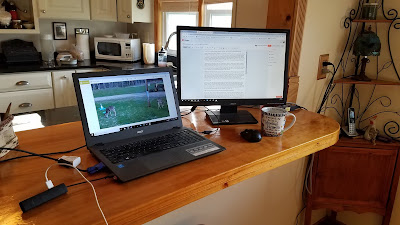 I stand at my breakfast counter typing this because I can’t sit down without agonizing pain.

Sunday night at about 9pm I was taking my shepherd mix Buddy out for his last potty call before bed. I had him on a retractable leash which gives him a little more leeway to travel a bit before find just the right spot. Unfortunately, he saw something across the yard and took off like a rocket barking ferociously. He got to the end of the line in about 2 seconds and despite my screeched NO! he kept going. For some unknown reason I held on to the grip while I splatted on the wet and muddy ground. It wasn’t a good landing. What came out of my mouth at that point should have assured the whole county that I was at least alive, though not well.

I already have an old injury to my spine in the lumbar region. A “bulging disk” I guess. I sustained that one long ago as a student at the University of Minnesota in my 30s sparring with a much larger, stronger, experienced, male Karate classmate. I attempted to deliver a controlled kick and we both heard something snap. I was down for the count with excruciating pain. I could barely walk for weeks and even used a cane to get around. I’ve been fighting a recent flare-up for weeks now, taking up the physical therapy exercises again and doing some yoga stretching.

I managed to hang onto the dog, but at my own peril. Between the swearing and crying and mud and rambunctious dog, I knew it was BAD. I’m not quite sure how I managed to get off the ground and get Buddy back down the stairs to his crate, but I did. Then I managed to get myself up the stairs and make calls: one to Nikki (of course) and then to a neighbor (Jim) and then to 911. How I managed to stop screaming long enough to talk I don’t know. When the ambulance came, they got me on a backboard and off we went to the ER in Bigfork. Getting me off my feet helped some, but the pain was incredibly intense. I’m not even quite sure I remember the sequence of events clearly as the pain was pretty distracting.

After a few x-rays they determined that nothing was broken. Since Jim was waiting in the lobby to drive me home, I was eventually allowed to leave. It wasn’t easy. The drugs and the pain made me wobbly. Walking was almost impossible, but I had to do it If I wanted to leave. All I could think about was my dogs locked in their crates in the basement who still needed to go out. I dragged myself up into his truck and off we went. I arrived home around 1:00am and actually did go up and down the stairs to potty the remaining pups. At least I imagine I did. I hope I did.

I fell into bed overwhelmed by pain and emotional and physical exhaustion.

The next day, Nikki arrived, somehow having arranged a couple days off. She took me to the clinic for a follow up and made sure I had enough meds to get me through for a while. The first muscle relaxer they gave me made me quite dizzy, even nauseous, and fright of frights, I woke up from a nap with extremely blurry vision. I thought I might be having another TIA (Transient Ischemic Attack) or a full-blown stroke. Being a nurse, Nikki was able to do a quick neurological assessment and ease both our minds. Upon further investigation, blurry vision is a side effect of muscle relaxers.  Nikki also insisted on putting up a temporary alley of fencing from the door to the fenced play area, so I wouldn’t have to keep anyone on a leash. 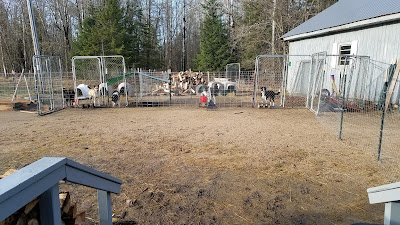 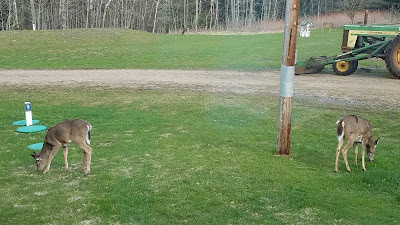 This evening, there were deer galore again. A couple so close to the fence that I’m sure the dogs would have attempted to crash through it or jump it if they were that close. They pretty much ignored me as I stepped outside and took this photo. Lessons learned:  retractable leashes are DANGEROUS. I disposed of mine. Always go outside FIRST to scare away the deer before letting the dogs out. Always let go of the leash if this kind of thing ever happens again. My well-being is more important than the dog’s. I understand that on an intellectual level, but my first and only reaction was to hang on and prevent Buddy from disappearing into the night woods.

I can’t wait to get the bills: ambulance; hospital; MD; Rxs, and X-rays, clinic appointment, etc. I have insurance, but it’s UCare through MNSure. I have a $6,500 deductible. And I pay $374 a month for this. My subsidy is even more than what I pay!

Shit sure happens! So, I’m hobbling around trying to facilitate speedy healing when my cats decide to start fighting. For real fighting! I react by sticking my bad leg out to block the attacking cat and find that I’ve made a terrible mistake. The pulled muscles let me know in no uncertain terms that moving like that was NOT ok.

I’d been pretty proud of myself being so diligent about stretching and doing yoga. My flexibility, strength and balance were significantly improved. So this is a setback I do not appreciate. At my age, setbacks are a real issue.  I have to be extra careful and vigilant at all times. If I were younger I wouldn't be so preoccupied with the consequences of carelessness.  But even that does not ensure my safety because shit happens to everyone, not just me. And even with a pretty good community around me and pretty good services, it’s still not quite adequate. As we age, we become more fragile and more prone to minor mishaps turning into full blown nightmares. 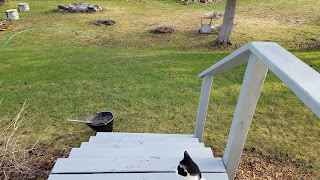 But there is even MORE to the story! yesterday morning I experienced another insult to injury. I had uneventfully taken the dogs out the south side of the house, and it was not slippery. I opened the north door to take out the ash can, took one step down the stairs and FELL AGAIN! It was 28° and I didn’t see the invisible coating of ice on the stairs. So now I have a huge bruise on my hip same side as the pulled muscles.

And the saga continues: I woke up from a nap yesterday with blurry vision again! Since this had happened before I didn’t panic. It passed in about 15 minutes, but I decided to cut my muscle relaxer down to half. I was pretty owly yesterday afternoon trying to sit at my computer and coordinate the arrival of a skid steer for next week, gopher one, and duties that needed to be performed for a couple of organizations I belong to. I admit I questioned my own sanity. 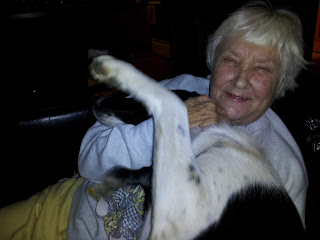 It takes a certain kind of crazy to choose an uncertain, perhaps even treacherous path entering old age. As my mom always said: Old age is not for sissies!

Photo on the right is my mom getting pounced upon by Mita. She always preferred animals over people. Miss you Mom!