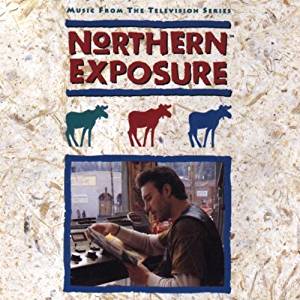 I’ve occasionally mused that my life since moving to Effie, Minnesota almost 8 months ago is eerily reminiscent to the award winning CBS TV series Northern Exposure which aired beginning in July 1990 and ran for six seasons. Awesome music aside, it was a show my family loved. The story-line is about the unlikely relationships formed in the imaginary and remote town of Cicely, Alaska. 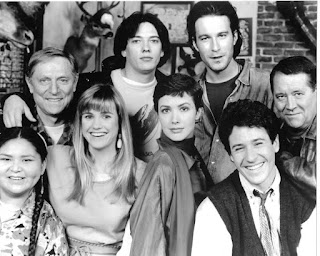 Each of the characters are quirky, eccentric to the point of pathological, and could be viewed as archetypes. Each character is more than just a representative though; each is a complicated human being with surprising twists. One of my favorite characters is Maurice. He’s one I both love and hate. He is a curmudgeon, bigoted, privileged white male and everything right wing that makes my skin crawl. But he pulls out his generous and softer side on many an occasion. He is the one who brought a doctor to town because it had none. He brought Shelly to town for himself but had to give her up when she fell in love with Holling. He always ends up helping others.

The similarities sometimes precipitate a déjà vu. Between Bigfork and Effie and Marcell, we have about the same population as Cicely. The population of Effie has been dwindling for some time now. There are less than 130 residents. I live in what I think of as a glorified cabin. It's actually an old farmhouse. It's 800 square feet with a bedroom so tiny it only fits a full size bed and one small dresser. It's cozy, but it's mine, and I like it. I feel like I've joined the ranks of the tiny house movement (except for the fact that I have a full unfinished basement and and a walk up attic!) 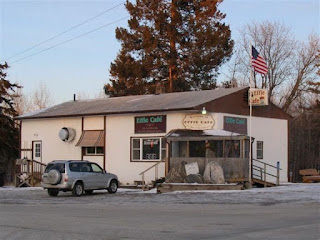 I live less than 4 miles to the heartbeat of Effie: the café, owned by Kathy and husband Willie (recently deceased at age 84) for more than 25 years. Kathy still works the café along with Mary Powell (adopted daughter of Willie) and a few waitresses notably including Tina the Ukrainian immigrant who has been with the café for a very long time as well. The café is Northwoods quaint, homey, and a little run-down. Willie, Kathy and Mary were the first people in town to really welcome me when I first moved here. I’d go in to eat with Nikki (who is a trans-woman) and my main—if intermittent cohort in survival here; Dan my recent ex-husband; Rainey my ex-partner in a previous lesbian life and 30-plus-year BFF; my mentally disabled daughter Maren; and the gals from SquatchHers (women-led cryptid research team). The food is plentiful and predictable and agrees with my sensitive Norwegian digestive system. 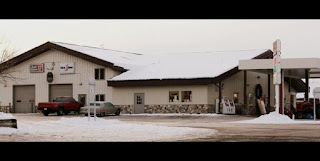 Across the street is the Country Service Station/post office/convenience store/liquor store/bait store/feed store, owned by Willie’s son Jeff Powell (who also runs a tree service/ excavating service/plowing service). He has other interests as well along with other brothers who have businesses in Bigfork.

At one time, Effie actually had TWO grocery stores which are closed now. The last Lutheran church just recently lost its woman minister. The boarded up school building sits in asbestos purgatory.

Effie is at the end of the line of The Edge of the Wilderness: a stretch of communities that extend north from Grand Rapids along the designated “scenic highway” of Minnesota 38. Along this road are markings denoting locations of interest from logging history. Most often there is nowhere to stop to muse on these locations, so I’m not sure why they are there. 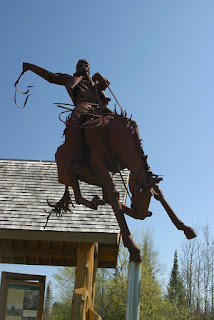 North of town before you turn to go to my place is the North Star Ranch owned by Cimarron Pitzen who runs the decades old Rodeo grounds of the North Star Stampede. It’s a really big deal here I guess, and I’m looking forward to the event the last weekend in July with both anticipation and trepidation. 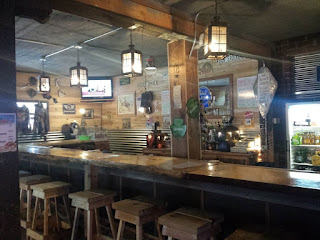 The Neighborhood Tavern is just down the street on Highway 38 from the pot-holed town intersection. It’s closed on Mondays. Has a meat raffle on Friday nights, and hosted the SquatchHers for a community “Squatch Chat” in March. The owner Heidi Gustafson is a young woman who is struggling to make this bar lucrative. It serves the basics along with hamburgers and pizza. It also has a mechanical bull which I’ve never seen operate, and there are also laundry facilities available. Occasionally there will be live music too. It’s a comfortable place to be where everybody knows you name! Cheers!

About 15 miles east on Highway 1 is a seasonal beer and set-up bar called Deer Lake Charlie's or The Dome as locals refer to it.  It's owned and operated by Gail Blackmer and has been around for a long time. Although it's a ways out, it's still considered Effie. 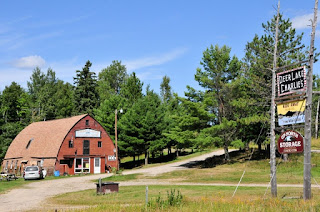 East on Highway 1 is the Forever Green greenhouse run by Missy Francisco. It’s an awesome place and she seems to really know what she’s doing. She’s even expanding adding another greenhouse. Along with plants she sells eggs and keeps a bison.

In Bigfork, there is a hardware store that rarely has what I need, but I go in there and buy stuff because I like Mary’s cats who are always there and demanding attention and her retriever type dog Emma. There’s also a nice gift shop in the back which used to be part of the original church.

There is one veterinarian in the area: Byron Sugden. He and his wife open the place for walk-ins on Monday, Tuesday, Wednesday, and Saturday from 9:30 -1 if they are not traveling somewhere. They would like to retire but cannot find anyone interested in buying the business. They are relative neighbors of mine, living only maybe 3.5 miles away.

There are other businesses in Bigfork too along with local utility offices. Another gift store, insurance, bank, a couple of eating establishments, a bar, and a terrible laundromat. Oh, and a gas station, a small grocery store, and just recently a Dollar General was opened! I am very happy to say there is also a clinic and hospital there with a chiropractor, massage therapist, and fitness center. Seven or so miles away is Scenic State Park. 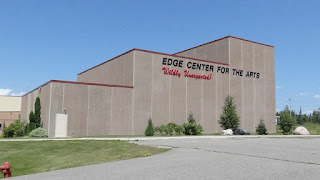 The best part of Bigfork in my opinion is the Edge Center for the Arts. Patty Feld is the executive director and spearheaded its development 25+ years ago. It has a very nice art gallery, and a superb theater which hosts music, film, and theater performances. She and her husband Barry have lived here for decades as well and are my next-door neighbors (maybe a quarter mile away).

Marcell is a sprawled-out lengthwise town with a nice little restaurant which is open seasonally. There is one antique shop attached to the liquor store and another which is about to close this year. There is a nice landscaping business, a gas station, and a lumber/hardware store. There is a very nice Family Center which offers yoga classes, and a non-denomination community church next door. Just south of Marcell is an RV campsite, and next door is Richie's Inn and Restaurant which is now closed and for sale.

Most of the people around these parts rely on tourism or logging to make a living. There is little in the way of jobs that pay a living wage. The closest big towns are Grand Rapids, Bemidji, or Hibbing, which are all at least an hour or more away on a good day. No surprise that there are a lot of older people living here.

I understand why some people might want to add jobs here at any cost. The copper-nickel mining project near Ely is a big issue. It’s virtually guaranteed to irreparably damage a lot of wilderness and water in Minnesota, but people are desperate for jobs now! It saddens me to see people accept such devastating and permanent trade-off for temporary survival. They refuse to believe that they could be personally impacted.

Farming is tough here. I have heard of innovative farming techniques in being used in Finland, Minnesota though. The soil is full of clay and rocks. Some sand. Lots of swamps. It’s great for wildlife, but not for farming (except hay and then only one cutting), or industry—unless you are a massive entity mining for iron or copper.

The weather is harsh. I noted more than once almost 50 below zero this winter. The past couple days have hit 89 above with oppressive humidity. The deer flies and horse flies love it though, as well as the mosquitos and the ticks. The “grass” (read weeds) grows so fast, I cannot mow it fast enough when I get a dry day.

There are so many deer I risk a collision every time I get in the car to go somewhere. There are bears all around me as evidenced by trail cams, tracks, and personal sightings by my next door neighbors, the Felds. I suspect that I have not seen any here due to the presence of my dogs and the fact that I am super careful about garbage disposal and do not feed the birds.

Which brings me to how disposal of garbage is accomplished. Each week I drive my carefully sealed garbage to the Bigfork Transfer Station where there are dumpsters lined up for recyclables and trash. The trash has electric fencing to keep the bears out when the location is unattended. I usually pay $2-3 a pop which is punched out of coupons purchased at the Effie Country Service. There are winter hours and summer hours. Winter hours are pretty limited.

Summer is when the tourists and city people are here at their cabins. There is more going on so there has to be more in the way of services.

But winter is pretty challenging if not downright desolate. It’s dark most of the time. It’s cold, as I mentioned. Survival is not something to take lightly. Hibernation is the modus operandi. That said, the bar scene at The Tavern is pretty hoppin' in the winter. There are snowmobilers almost every day, and really it's quite convenient for me to get there for some socializing.

But winter also awesome. It's quiet. There are no bugs. It's cozy inside. I’ve seen moose too! Not exactly walking down the street like on Northern Exposure, but less than 1 mile from my house!

The people here seem to be mostly conservative, right-wing Republicans who counter-intuitively are also usually pretty nice people--like Maurice on Northern Exposure. There are some left leaning liberals here too, and I have more than an inkling who some of them are. I'm not completely alone. I think one of my life lessons this time around is to learn that people who seem to hold deplorable viewpoints can also be very welcoming and open-minded. I still don't know what to make of that. I guess I need to take people one by one and not assume. 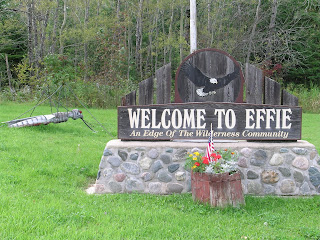 I feel like I’ve only scratched the surface of my new community. And yes, I feel like I am a part of this community already. I have been assured that I have the bragging rights of having moved here during the winter and not only survived but thrived. The fact that I don’t want to leave is testimony that seals the approval.

Always the renegade, I guess!