Those were the slogans repeated over and over at the 8th congressional district round table discussion with Rep. Stauber yesterday in Northome, Minnesota. He opened with that, and closed with that and repeated those slogans frequently during the hour and a half meeting. It took place in remote Northome, at 10:30am-noon. I attended that meeting.

The only reason I knew about this “town hall meeting” was because I joined the Northome Area Facebook group. I contacted the Itasca DFL to find out if anyone was going, and they didn’t even know about it. They announced the event at the central meeting that night but reported back to me that no one was interested in attending.  I had RSVP’d earlier with the requested list of topics that interested me: crisis at the border; climate change; gray wolf; copper mining.

I was prepared for this to be more of a social anthropology excursion for me as I knew that Stauber is Republican, a Trump supported, pro-mining, a Christian who is “pro-life” as well as a 25 year police force veteran. I wanted to see who else was in attendance and how militant the right wing in the north woods is.

I walked into what felt a lot like a Lutheran social (which I reluctantly admit immediately made me feel comfortable). I signed in at the door and put on a name tag and was offered cookies and coffee. There was a U-shaped configuration of white topped tables set up for the VIP panel members. Chairs for the rest of us were set up facing the VIPs. I’d say there were about 60 people there total. The group was completely homogeneous: all white; all older; mostly male. Of the 15-20 people sitting on the panel, only one was female. She came representing an electrical coop.
Stauber sat in the middle flanked by his assistant one side and Bob Zimmer, the mayor of Northome on the other.  Ted Lovdahl, the 8th district GOP chair (and I might add, once of my close neighbors) was next to Zimmer.

After much gushing about how wonderful Stauber is they opened the floor for questions and I raised my hand. To my surprise, I was the first person called on! I asked what Rep. Stauber was doing about the humanitarian crisis at the border. Here’s the recap:

Stauber has recently been to the border town of Yuma, AZ himself and had these observations: The agents are overwhelmed and don’t have enough resources but are compassionate and caring towards the migrants/refugees. Drug cartels are using migrants as unwilling mules to overwhelm and distract border agents so that they can slip drugs into the U.S. They drive on the other side of the Colorado River in jeeps and ATVs during the day to prevent crossing, only allowing the migrants to cross at night. They are using drones to scope spots to pass the drugs. He also said he was shown a package of fentanyl that could kill the entire population of the U.S. twice over. Rented children are being sent over with fake family members because they know they must be released within 48 hours. The children are flown back to Central America, and the adult disappears never to show up at their immigration hearing. And the child is used over and over. He also said that refugees from Central America cannot be returned to Mexico either which is a problem. Stauber was firm on the idea that if there was no demand in this country for drugs that there wouldn’t be this problem. He maintains that there must be “Prevention, Prosecution, and Treatment” for drug users here.

Stauber did not address many of the facts or conflicting observations made by others who have toured the detention centers. It was clear that this would not be an exchange or conversation. He ended on a very positive note by pointing out that Congress had just approved another $4 billion in funds for border security.

No one else brought up any of the other issues I was hoping to hear about.

There were a couple of people who railed against “socialism” and that the Republicans needed to educate the public on what it really is and how dangerous it is. They mentioned the Democratic debates and how FREE this and that was the hallmark of socialism, but nothing was free and that the money for health care and education would be coming out of our own pockets.

I found it ironic that every other person speaking on behalf of area medical services, schools, or utility companies all asked about federal funding for their services. No one seemed aware that there is an obscene level of income, wealth and resource inequality in this country. It’s the elephant in the room which no one will address. I wanted to scream that there was plenty of resources but that we do not have control of how they are used. But I didn’t because I knew I’d be thrown out.

Then the topic of infrastructure was also brought up—with the expectation that federal funding was needed. I would have been amused if it weren’t so disturbing to witness this mental blind spot on a group scale (even if tempered with polite Minnesota niceness).

Stauber talked a bit about mining and how it is so important to northern Minnesota. Although he did emphasize the importance of safety and regulation compliance. He made it all sound so under control.

Some people in attendance were more concerned about the possible loss of fishing and hunting privileges if HR799 and S199 were passed. Apparently, these bills return 11,000 acres of federal land in the Chippewa National Forest back to the Leech Lake Band of Ojibwe. No one seems to know or care that 90 millions Native Americans were eliminated by genocide so that our forefathers could leave us the legacy we now enjoy.

The principal of Northome school opened the subject of school funding for special education. Since Stauber has a special needs child he was all about making the federal government live up to its promise of funding special needs education.

He was also sympathetic to vets not getting needed health care because payments from the VA are not reaching the providers. He did not know why that was. But he was very sympathetic.

One irate man asked about why it was that he couldn’t get opioids for his back pain and felt he was being unfairly targeted. Stauber explained very tactfully that he was not being targeted, but that there was a blanket policy….and thanked him for sharing.

These are just some of the highlights of the meeting. 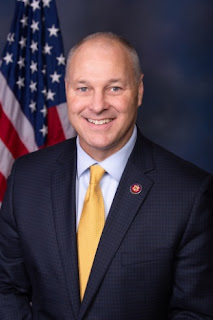 Overall, I was impressed with Stauber’s sincerity, intelligence, and ability to speak well. He deftly handled everyone with respect and made everyone feel heard. On the other hand, there was no opportunity to get very deep into any topic. I walked away feeling better than I expected but wondering if my question made any impact at all on him or anyone else. I fear not. He was pretty good at directing his responses to what is positive and minimizing the negative without dodging the subject.

I am disturbed with what is going on at the border and think that Stauber is being willingly deceived due to his background in law enforcement. He is passionately supportive of law enforcement and the military (at least active military).

My take on all this is that the residents of District 8 are basically good people despite their Republicanism, who have little to no interest in confronting unpleasant truths other than the ones that affect them at the moment. They are understandably wrapped up in the unique challenges of survival in the north woods and in small towns. As I’ve seen over and over in my life, intelligence does not lead to success; in fact, it often leads away from success. I’m not saying that the people up here are stupid; but rather, wittingly or unwittingly somewhat happily uninformed. And that makes them accepted into t he club in this neck of the woods.

My thoughts on the Democratic message: stop talking about FREE medical and FREE college. To most people up here, all they hear is that their taxes are going to go up. These issues need to be reframed big time. Perhaps as subsidized, or sliding scale, or affordable, or something. But not FREE. People up here work HARD, and struggle for every ounce of happiness and success they get. They are not cool with FREE.

Dems also need to stop talking about socialism. It’s a BAD WORD. Even though everyone is on the dole from the federal government in some way or another, no one sees that as “socialist”.

I thought it was quite clever to adopt the “Small Towns Matter” and Rural Minnesota Matters” slogans which appeals to the ubiquitous and mostly unconscious racism.  The white, conservative males that hold power here may be big fish in a small pond, but they don’t see it that way. In fact, they see Minneapolis and Saint Paul as enemies trying to shove policy down their throats and them as righteous warriors protecting their families. They will be the least likely to be offending by Republican gerrymandering!

Stauber’s ingenious  remark to votes was every vote should carry equal weight—no more and no less. Which no one can disagree with right? Unfortunately, I’m absolutely sure that’s not what his audience heard. I'm pretty darn sure they heard that Northome should have just as much influence over laws as Minneapolis/Saint Paul. Their population of 200 compared to the Metro's almost 4 million….that doesn’t sound equal to me! Even if you take the population of the entire 8th district (which is under 700,000 including Duluth) you can still see that people in this vast district feel their vote is worth way more.

Now, I actually do sympathize with this feeling. I live here. I’ve never wanted to live in the city. I’m here because of that. I am an outlaw from big city society. I don’t want people removed from my reality to have control over how I live my life.

On the other hand, we are all in this together. What happens here affects those in the city and what happens in the city affects us up here.We must learn to come together and correctly identify what the real threat is. It’s not city vs. country. That’s one made-up diversion strategy along with the war on drugs and illegal immigration.

The real threat is the almost incomprehensible imbalance of wealth, income, resources and power. The one half of 1% has most of us glazed over with confusion and distraction. I’m not sure how we’re going to get out of this one.

Evolve or die I guess. I'm working on evolving.