Where’s Bigfoot? It’s sort of like finding Waldo or Wanda: everywhere and nowhere. 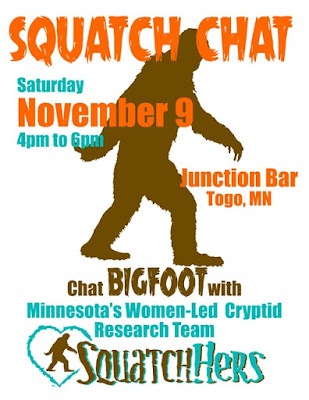 On Saturday, November 9th, 2019 from 4pm-6pm the SquatchHers will be at the Junction Bar in Togo, Minnesota to hold another of our signature Squatch Chats. This should be an interesting evening as Saturdays the Juntion has a prime rib special starting at 5pm. It’s also the opening of firearms deer hunting and typically the place is packed with hungry and thirsty hunters.

We’ve been to the Neighborhood Tavern in Effie, Deer Lake Charlies East of Effie already, as well as The Big Winnie in Bena. I believe Hayslips Corner in Talmoon is on the radar as well. The turnout is always amazing. We are happy, the proprietors are happy, and the people who have an outlet for their sometimes disturbing Sasquatch secrets find themselves relieved, supported and happier too.

During these “Chats” we share some of our photos and other findings with the community and encourage others to share as well. Typically, the “formal” informal presentation fits between a 2-hour window with several folks stepping up and talking about their personal experiences and stories of Bigfoot or Sasquatch. There is still a stigma attached to the claim of a Bigfoot sighting so some people prefer to approach us afterwards to share their stories. Some folks are quite open and enthusiastic about the whole subject, which we love! Whether shy, just curious, or eager to share a story, we always make new connections, friends, and have a lot of fun!

Since I moved to the Effie area almost a year ago, we’ve encountered many folks who either have had direct experiences with a Bigfoot, or know of someone who has. It’s been surprising to me that sighting are so common. We’ve heard of sightings everywhere from the Grand Rapids area to the Canadian border and beyond. Several of the sightings have been right in the area in which I live!

On the other hand, I’m not surprised either. The terrain is rugged, swampy, full of gullies and bogs. The weather is bitterly cold in the winter, and unbelievably hot and wet in the summer It’s unfit to farm except for maybe patches of hay. The principal industry here is logging, mining, and tourism. Between the cockleburs, thistles, and stinging nettle, not to mention the mosquitos, flies, and ticks, one wonders why anyone would want to live or vacation here. The small towns are depressed, and populations are declining leaving a lot of gray-hairs to duke it out with the elements of nature. But it’s also strikingly beautiful and wild here. It’s a perfect environment for wildlife. There are deer, moose, elk, wolves, coyotes, skunks, bears, fox, beavers, just to name a few, along with loons, hoards of hummingbirds, bald eagles and other raptors and lots of crows and ravens. Just south of Effie are myriad lakes and their resorts luring people up to the Northwoods for R&R, fishing, and hunting. I imagine it’s probably a great place to be a Bigfoot.

So what kind of things have the SquatchHers actually found that could be construed as evidence?The most compelling evidence, I think, has been the footprints. Footprints are best discovered in the snow, so our favorite time to explore is in the winter. Yes, it’s often bitterly cold, but there are no flies, mosquitos, and few people. We typically like to explore in areas where there have been reports, so that has taken us to regions remote and surprisingly not so remote. Like I said, Bigfoot is everywhere and nowhere it seems! The startling thing about Bigfoot footprints besides the size of the print and length of stride, is the feature of appearing out of nowhere and disappearing into nowhere. We have followed prints that lead nowhere. They didn’t end at a body of water or at rough terrain; they just disappeared. Likewise, they also simply appear somewhere odd. Sometimes there’s a trail, but most often it’s one to two or very few footprints. Very odd. The implications of that are somewhat discomforting for some. Flesh and blood animals don’t just appear and disappear into thin air, now, do they?! Or do they?

Dare I mention the “I” word: interdimensional? It may sound crazy to some, but what else might explain this weird phenomenon? Theories range from Bigfoot being able to generate portals to escape capture; extraterrestrials dropping them off here and there and then beaming them up again to being a cryptid on the order of an ape to a humanoid that spit from our species millennia ago. Some say Bigfoot is benign, and others swear they are dangerous. Maybe they are both! (Like humans) I tend to lean toward the interdimensional because it’s the easiest way to explain why we cannot seem to find them.

It would also explain why no one (presumably) has presented any solid physical evidence, like a body or DNA. There are Bigfoot Hunters out there whose goal is to kill a Bigfoot and present the body to “the scientific community” so that it can be subsequently protected. I find the assumption that simply producing a dead body assures the animals’ protection to be ludicrous. There is ample evidence that humans often don’t protect animals just because they exist. Especially when there is money to be made. There is also the assertion that our government/military/covert operations does have physical evidence. But, I digress…

So, what is our goal? What do the SquatchHers hope to prove? Well, nothing. Our goal is not to prove to others that Bigfoot exists, but to prove to ourselves that it does. Most of us in the group are skeptical believers, and compelling though footprints, stick structures, stone lobbing, glowing eyes, loud vocalizations and others’ stories might be, we want to see for ourselves. Most of us in the group have been or are currently paranormal investigators as well, so are sensitive to the energy of the mysterious. We are compelled to learn more in an attempt to make the unknown more known. Inquiring minds want to know. Not just to simply believe.

I personally think that no one will find Bigfoot except by accident or if Bigfoot wants to be found. I think all the tree knocking and howling into the night does little more than announce our disingenuous presence (in terms of trying to sound like Bigfoot) to anything in the vicinity that can hear us. All that noise pretty much assures us a wildlife-free hike, and a Bigfoot-free mission. But we love the woods with all its natural and unnatural challenges, not the least of which are other humans.

So, carry on all you Bigfoot Hunters. Just keep those guns holstered. There’s more out in the woods besides Bigfoot: us SquatchHers. You can follow us on Facebook HERE.